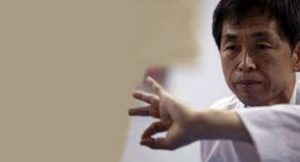 The former is the discipline of obedience based on Confucian principles. The latter is the discipline to train ourselves on Buddhist principles. Hapki-zen is based on Confucianism and taoism, and the second programs are based on Buddhism. Hapki-zen is designed for training for damaging ways such as defense and offense, and the second training programs are for the training to move to the nature of the universe by communicating with one selve and helping each other. Even at present our martial arts seem to train the damaging ways of punching, kicking, breaking, and throwing, which are for fighting and protecting the body.

The training Hapki-zen is to help communicating and corresponding with each other and one selve.  When young, one may want to train through damaging ways because he/she is energetic, and when one is old and on a higher level, one wants to train through benefiting and helping others, overcoming the damaging ways and enter into the world of zen through discipline. For the first programs one can learn through internet because one can master ways of offense and defense by learning their technique using texts and videos.

However, for the second programs one needs deeper training with the help of the trainer who is at the higher level because the second programs are designed for the systematic training which provides liveliness and energy to the body and mind through sophisticated and philosophical training. Without progress and innovation any art will cease to evolve and eventually die out.